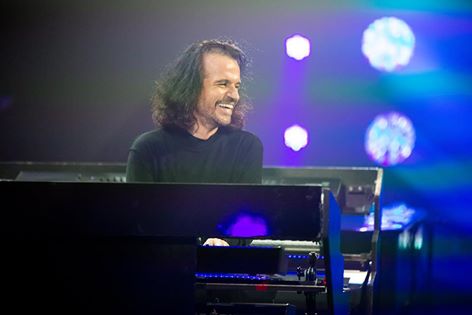 The concept of being a true global artist didn’t really exist until the rise of Yanni, the visionary Greek keyboardist/composer who’s played his own unique brand of instrumental music for over 5 million concertgoers worldwide (and counting).

Excerpts from the interview with Michael Mettler

Tell me about your goals for the sound design of Sensuous Chill.

Yanni: It’s actually a very special album, a very unique album that’s not a representative of my life’s work, but I love it. The album was meant to be that way. It has a specific sound to it. It’s only taken me 5 years to make it.

Mettler: Oh, is that all? (both laugh)

Yanni: That’s all! (chuckles) I’ve been planning the songs very carefully — who I worked with, what sounds I used and why, and what sequence the songs to come in, one after the other. All of these things are critical. The album itself has become a song. It’s not meant for you to just pick up a song in the middle of it. It’s meant to be put on, put on REPEAT, and let it play….

On this particular album, nobody’s going to jump in the middle of a song and go, “Hey, I’m doing a guitar solo; listen to this!” Or, “By the way, here’s a violin solo; listen to this!” It’s meant to take you through a journey. It’s supposed to be, first of all, sensuous — that’s why it’s called Sensuous Chill. And it’s a chill album; it’s light, for the most part. And then it’s supposed to be melodious, with some rhythm, and it’s also supposed to be sexy. I insisted on that. You have to have a feeling for it, and a passion with it…

Mettler:  On Sensuous Chill, I really like the way the melodies unfold at the beginning of certain songs through just the piano. I feel like I’m being “sung to” in the first few bars, even though there aren’t any lyrics.

Yanni: Somebody’s talking to you. It’s very intentional, because I am talking; I just don’t use words…

Mettler: It’s like a live set, in a way. You’re taking us through peaks and valleys in a show. You can’t just keep going up the same ramp. You need those crests so you can go back down, and then bring people back up.

Mettler: To me, you could almost play this album live from beginning to end in this order. The audience would be right there with you.

Yanni: It will hold! You should be working with me, because you totally understand it! (both laugh)

Mettler: Well, I did grow up as an album guy! And on certain albums, Song 1 informs how you’ll feel about Song 6, once you get there.

Yanni: Of course! You can’t just jump. If I may be honest about it, the reason I made that album is, I made it for me. I wasn’t making an album for anybody — I was just trying to find something that I could listen to that was on the easier side, not so demanding of your attention: “Pay attention, it’s Beethoven’s Fifth! Come on!” I looked at all the Internet stations, and I couldn’t find it. Sometimes I would hear one song I’d like, then I’d hear 10 songs — and I apologize for saying this — of children playing with keyboards and synthesizers, you know? So as you can imagine, my brain has been used for music for a good 45 years now. My taste has developed. I’m a pretty difficult customer.