We are excited to announce INSPIRATO - The masterpiece album from Yanni.

YANNI’s greatest music performed by the world’s most extraordinary voices:

Yanni, working in partnership with the legendary operatic superstar Plácido Domingo and producer Ric Wake, has assembled a stellar line-up of the greatest singers to perform on his new album, INSPIRATO. Yanni’s timeless compositions have been transformed by the addition of lyrics and tells the story of the loves of YANNI’s life. 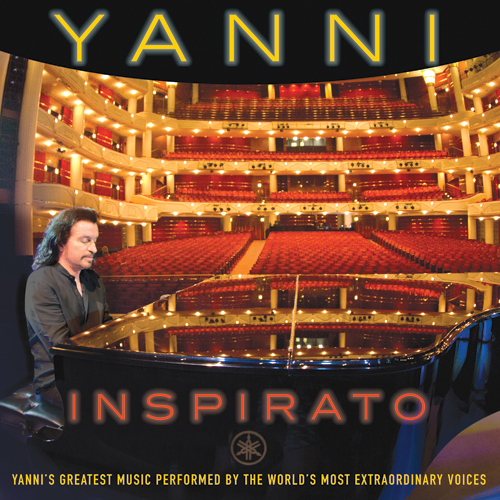 1. Renée Fleming - I Genitori (To Take To Hold)

Plácido Domingo, a world-renowned artist, recognized not only as one of the most influential singing actors in the history of opera, but also as a respected conductor. Plácido Domingo’s vocal repertoire encompasses 144 stage roles – a number unmatched by any other tenor in history – and he has recorded more than 100 full length opera’s. Maestro Domingo, is one of the world’ leading philanthropists and has been awarded 12 of the prestigious Grammy Awards including 3 Latin Grammy’s and reached an unprecedented global audience as part of the ‘Three Tenors’ phenomenon.

Renée Fleming, known as ‘The people’s diva’, and winner of the 2013 Grammy Award for best classical vocal solo, in February 2014, Renée became the first classical singer ever to sing the “Star-Spangled Banner” at the NFL Super Bowl with an audience of over 110 million viewers.

Rolando Villazón is one of the world’s most critically acclaimed and beloved stars and is internationally recognized as one of the leading lyric tenors of our day and is regularly hailed as ‘The Next Domingo’.

Katherine Jenkins, OBE, is the world’s most prolific classical crossover artists. In 2003 she signed the biggest-ever recoding contract for a classical artist and has since become the premiere ambassador of brining classical music to a mainstream audience. Katherine won the love of the US television audience during 2012 when she was the finalist on ABC’s hit TV show, “Dancing With The Stars.”

Vittorio Grigòlo, achieved gold and platinum status with his first releases and charted #1 on the Billboard US Classical Album chart with the “Italian Tenor.” Vittorio is already established as a successful recording artist. 2014 will see the release of “The Romantic Hero” – a collection of Vittorio’s favorite French opera arias.

Russell Watson, the UK’s best selling male classical artist ever. Known as ‘The People’s Tenor’ Russell became the first British artist to hold the #1 spot on the UK and US charts at the same time. Russell has performed for audiences around the world including the Pope at the Vatican, the Emperor of Japan, the Queen as well as two US presidents.

Micaëla Oeste, born in Germany and raised in America has performed throughout the United States and Europe. She has been selected to sing with the Piccinni Foundation in Italy and was also chosen as a finalist at the International Neue Stimmen Competition. Micaëla has become a frequent guest artist during many of Plácido Domingo’s recitals.

Nathan Pacheco is an American tenor who first appeared as a featured performer on the Yanni Voices Project. He has been a fixture on television over the last four years with his own PBS Special’s and performances with the Mormon Tabernacle Choir.

Chloe Lowery is an American singer/songwriter of by the age of 9 was performing professionally and was signed to a recording contract with RCA at age 12. Chloe has toured the world as a featured vocalist with YANNI, Chris Botti, and Trans Siberian Orchestra.

Lauren Jelencovich is a classically trained graduate of the Manhattan School of Music. She has performed throughout the world with YANNI and has been featured at performances in Carnegie Hall and Radio City Music Hall. Lauren is the recipient of Andrea Boccelli’s Wold scholarship and holds top awards from numerous competitions including the Gerda Lissner International Competition.

Pretty Yende, is an internationally acclaimed soprano born in South Africa. She was crowned the winner of Plácido Domingo’s Operalia World Competition in 2011 in Moscow.  In January, 2013, Pretty Yende made a sensational unscheduled debut at the Metropolitan Opera and later that month in Vienna. The triumphs she gained in these two engagements catapulted her to international attention brining immediate invitations to appear in all of the world’s greatest theaters.

Each song has a deeply personal story behind it. ‘Ode alla Grecia’ (which was formerly the instrumental ‘End of August’) was composed when YANNI was at home in Greece, watching all the tourists departing at the end of summer. As he stared at the ocean, he reflected on his love for his homeland, and felt how bittersweet it was to leave to return to his career in the USA. When Domingo and his son heard this track, they knew immediately what story the lyrics would have to tell.

Another fascinating tale lies behind the wordless song ‘Ode À L’Humanité, based on YANNI’s version of the ‘Flower Duet’ from Delibes’ opera ‘Lakmé’. When the South African youngster Pretty Yende heard this on a television advertisement for British Airways, it sparked her love of the sound of the operatic voice, so much so, that it fired her with a desire to become an opera singer herself. Having overcome enormous hurdles, she is now one of the brightest new stars in the opera world, and has appeared in major roles at La Scala and the Metropolitan Opera - and all thanks to inspiration from YANNI. Each of the songs has a similar story. Pretty’s recording of this song that inspired her career path will touch your heart.