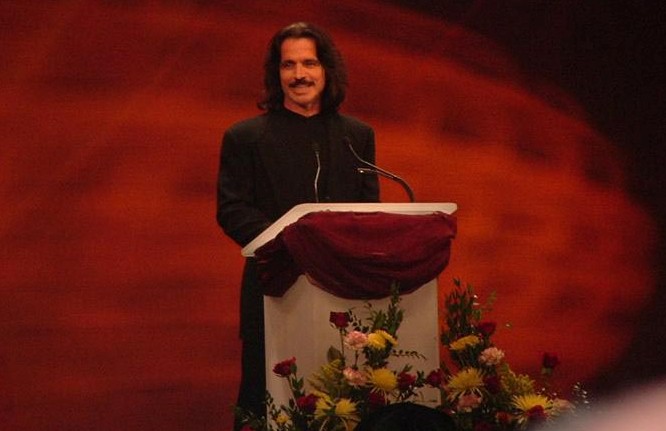 "Wow. Thank you. Thank you so much. Thank you. Well, I’m very moved right now. I’m very touched. I’m deeply honored first of all. This place brings back great memories. Northrop Auditorium was the place where I took my very first class at the University of Minnesota.

It was Psychology 1001. It was 8 o’clock in the morning, January 19, in . . . I hate to say this . . . `73. Man, that sounds really old. And it was really cold. I remember that. I was sitting somewhere over there, somewhere in the middle, and I can tell you right now, it was a lot easier sitting down there than it is being up here right now. I barely spoke English at the time, and I remember trying to understand what the professors were trying to teach, and I was really wondering whether I was going to make it or not.

But, how did it all start? How did I get to the University of Minnesota, and why Minneapolis? Well, it all started with an act of human kindness by one of my greatest heroes, my father. See, back then, the University of Minnesota was getting ready to do excavations in southern Greece, very close to my house. They had sent a young couple to Greece, and they were making maps in advance of the expedition. They were cartographers. Their names were Bill and Esther Loy.

At that time my father was the assistant manager of the local bank. Bill and Esther kept coming into the bank day after day looking for their University of Minnesota expense check, which was not arriving--due to a postal strike, of course--and they were running out of money. So, my father noticed this young couple coming into the bank and leaving distressed one day and the next and the next. So he decided at one point to talk to them. And I’ve got to tell you something, my father is a great judge of character. After talking to them, he decided that he was going to lend them money to tide them over until the check arrived, and they were stunned.

The best part of this is the check eventually came, and they paid the debt back, but in the meantime we had become family friends. They would come over for dinner, we would go out on excursions, go swimming and biking and all that. And that began my first connection to the University of Minnesota.

Eventually, the rest of the expedition was going to get there, so they needed to buy land.They needed to build an expedition house. They needed to get permits from the Greek government and so on, and, of course, they hired my dad to do all this. Eventually they all showed up, and my father and mother would take me on site where the excavations were taking place. I would meet the professors and the students, we would talk, and they would also come over to my house for dinner. My mom --being a Greek mom -- just loved all the commotion and cooking for everybody.

That’s when I met the leader of the expedition, Bill McDonald. Well, Bill left a lasting impression on me. He became another one of my heroes, and he was a great representative of this University. Bill possessed humility about knowledge. He always treated me with respect. He never talked down to me. He always engaged me in dialogue, and he always tried to engage my creative spirit, which was in sharp contrast with the autocratic environment that existed in the schools in Greece at the time. I thought if I ever was going to have a teacher that they would be like Bill McDonald.

So when my father asked if I was interested in going to America to study at the University of Minnesota, my answer was very easy. See, it was my father’s dream to come to America, but it never materialized; and it was my mother’s dream to become a singer and an entertainer. They say that some kids live out their parent’s dreams. I got the first half right. I don’t know about the singing part.

So on November 8, 1972, I landed at the Minneapolis airport. I checked into Territorial Hall. I registered for classes with a major in psychology. I hate to tell you this, but do you have any idea what my first job was at the University? I was washing dishes at the Campus Club in Coffman Union. For all I know, a few of you were eating dinner at the time when I was washing dishes in the back. And, I don’t know if you know this, but Greeks have a tendency to break plates in celebration. I now freely admit that back then I broke a few plates, but it was a complete accident.

My English was pretty poor and studying was a real problem. I was studying Psychology, so the books were pretty lengthy, and I had to read them with an English/Greek and Greek/English dictionary. I would go through the paragraphs over and over again and each of the sentences and words I didn’t understand. It was a pretty frustrating process, a very slow process. I’ve thrown quite a few books up against a wall, and there was a time when I felt maybe I’d never learn how to speak English. However, all this frustration ended up being a blessing in disguise, because it forced me to read each paragraph quite a few times, which meant I memorized things very well, and I did very well on my tests.

I also realized that good grades meant financial aid, which I needed desperately. So I made a connection: I thought--washing dishes--reading books--washing dishes--studying. It took me a while, but I figured out the better course of action was to read a few more books. So I immersed myself in the studying and I did get financial aid all the way through college, which amazed me back then and still amazes me today.

At the same time, ever since I was a kid I had a passion for music, but as you saw in the video my parents gently discouraged all of us from using music as a profession or way to make a living. But the music voice inside me was getting pretty loud, and it was hard to ignore. So I began playing the piano a little more, and I started composing a little more.

Whenever I couldn’t get to a piano, I would sneak into the music department, to the empty practice rooms, and play there until someone came and kicked me out. During the last year of college I actually played with a couple of local bands, and . . . how do I say this? . . . we were pretty terrible. But we felt we were great and that’s all that matters. I loved the experience and that’s what truly matters, and so I couldn’t ignore this voice that was inside me.

So I decided when I graduated with my degree in Psychology to take a year. I thought, okay, I’ll give myself a whole year of just doing music exclusively and see how I like it. I was the happiest I had ever been in my life during that year, and that’s how I knew music was going to be what I was going to be doing for the rest of my life. My family was not very happy about my decision to get into the music business, but they supported me, they always have in the past.

I know one thing: You’ve got to be passionate about what you do in life. Passion is the fuel, and I had plenty of passion for music. I made that decision back 20, 25, 30--my math gets really bad when I try to calculate my age--a long time ago. Anyway, the rest is history. I’ve been doing it ever since.

I just wanted to tell you that music has taken me all over the world, and I have taken with me the open-mindedness that comes from having been raised in two different cultures, and having been educated at a great university. And I will always be grateful to the University of Minnesota. When I was young, the world was opened up to me here. People at the University took me in, they supported me in every way possible, and they wanted me to make it. They wanted me to succeed. I haven’t walked the halls of this University in 30 years, but I can tell you that the educational process that I was a part of really, really works, I’m living proof of that. Please know that what you teach and how you teach it makes a profound difference. It did for me, it still does for the kids of today, and it will make a profound difference on generations to come.

And, finally, from one University of Minnesota graduate, from the bottom of my heart, thank you.

Thank you for helping me find my way. Thanks."