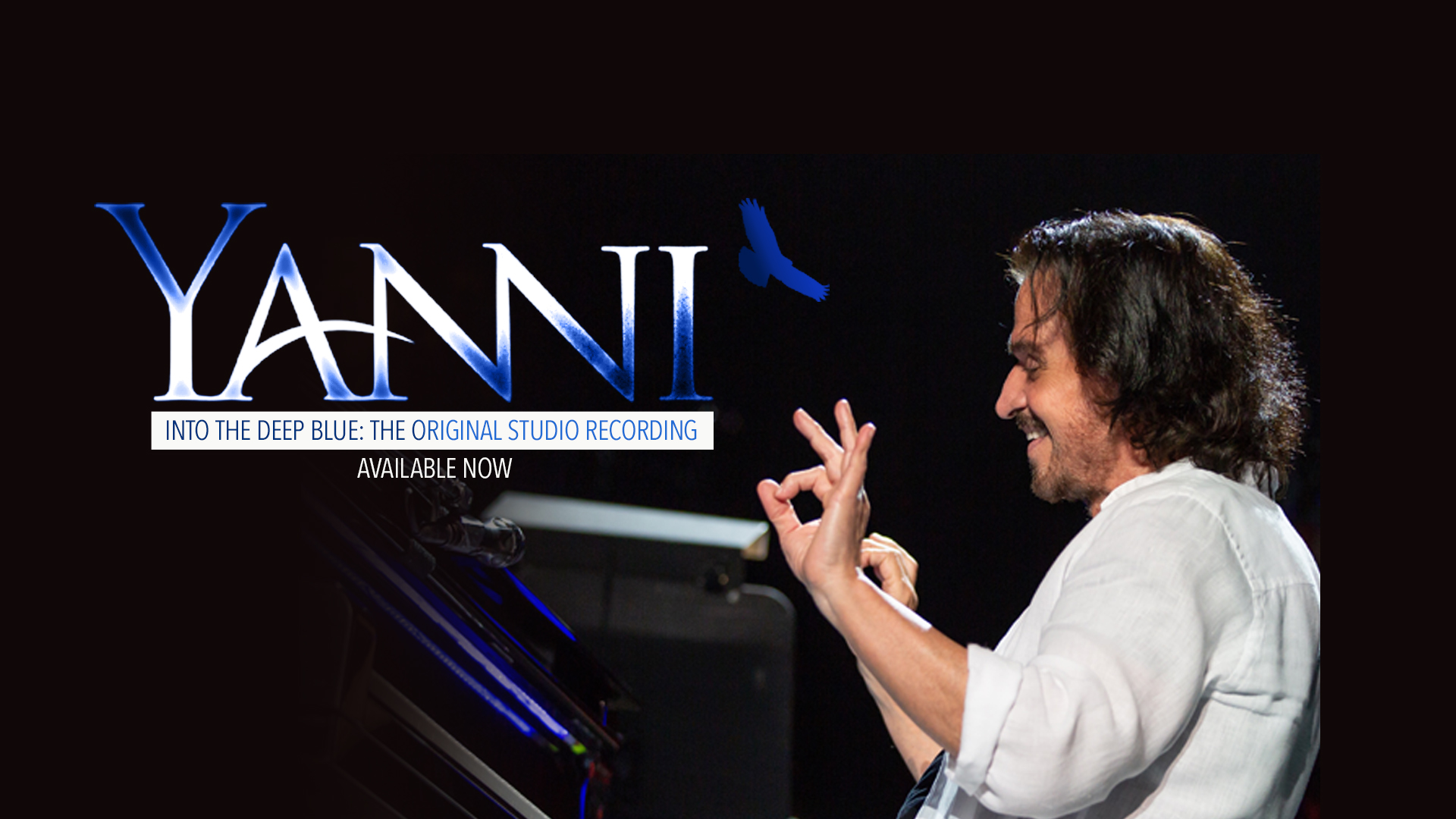 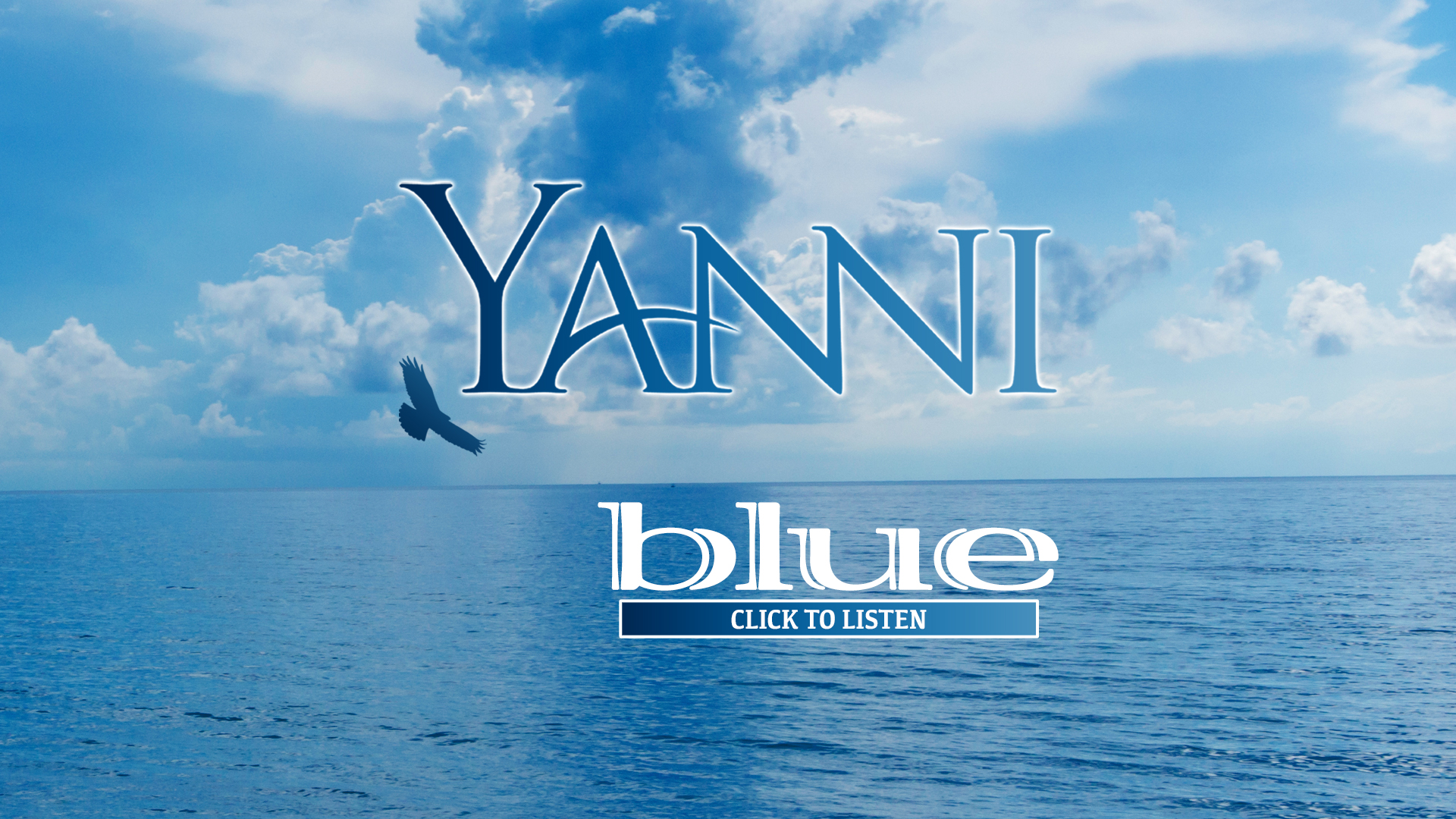 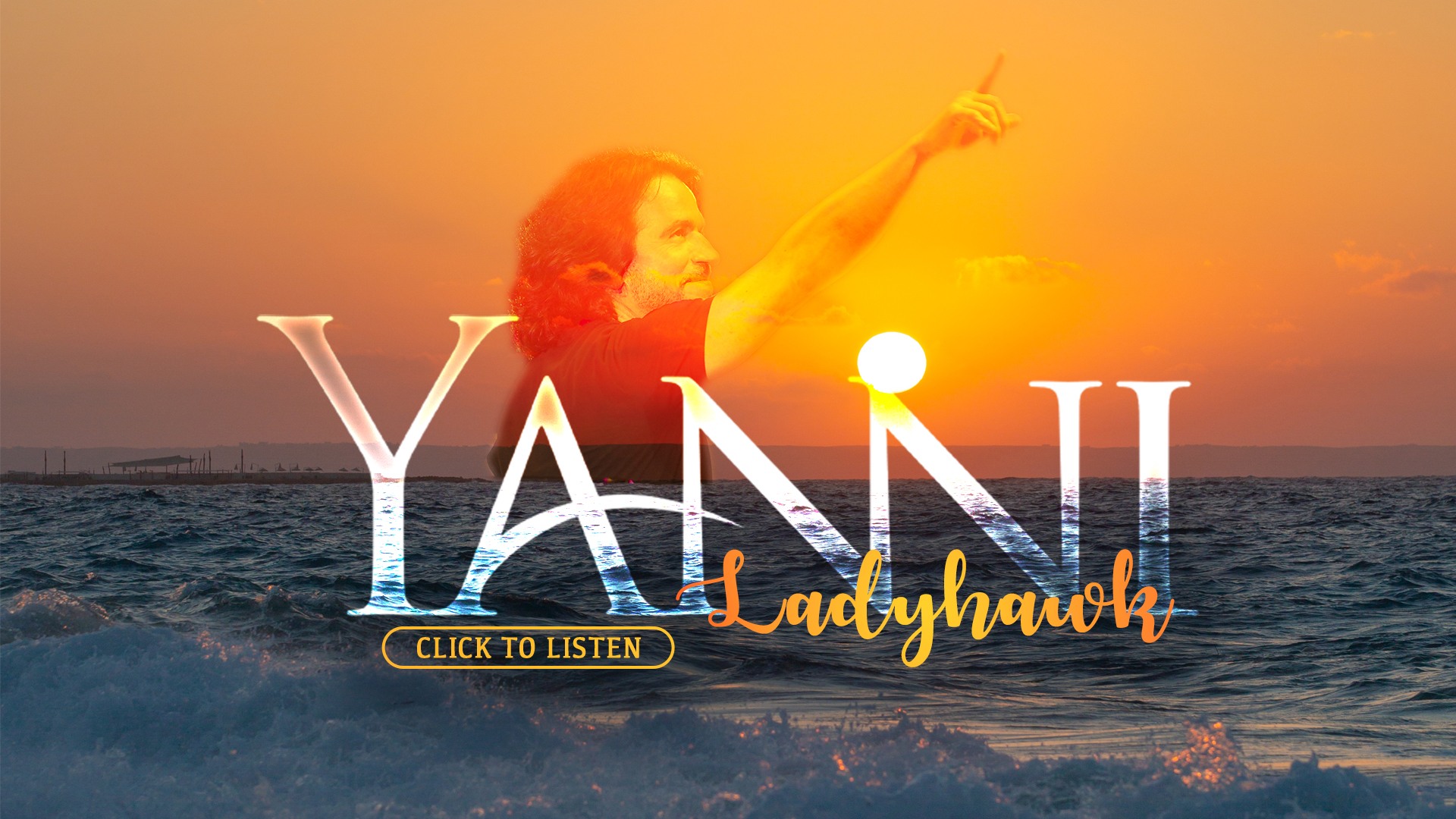 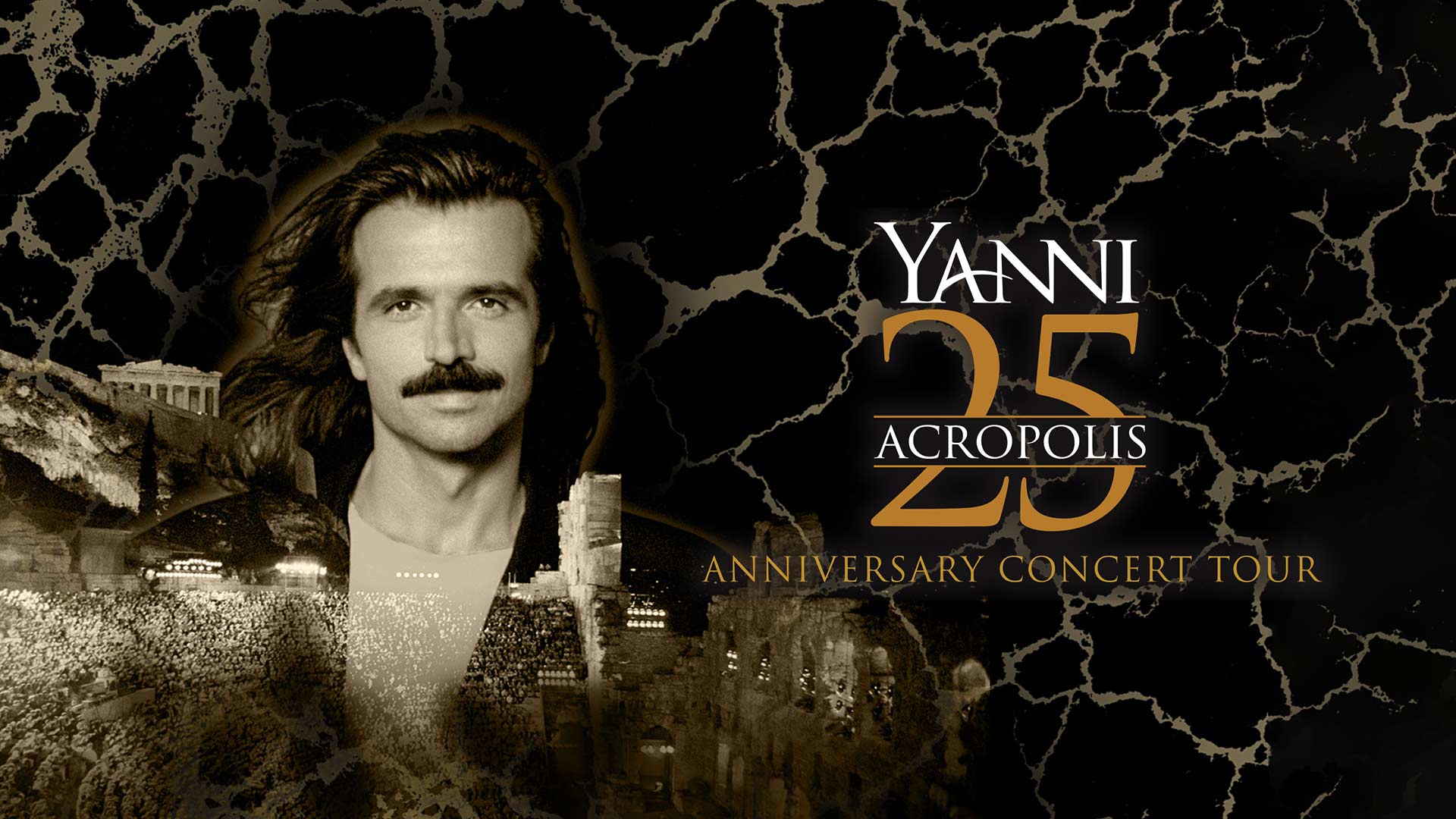 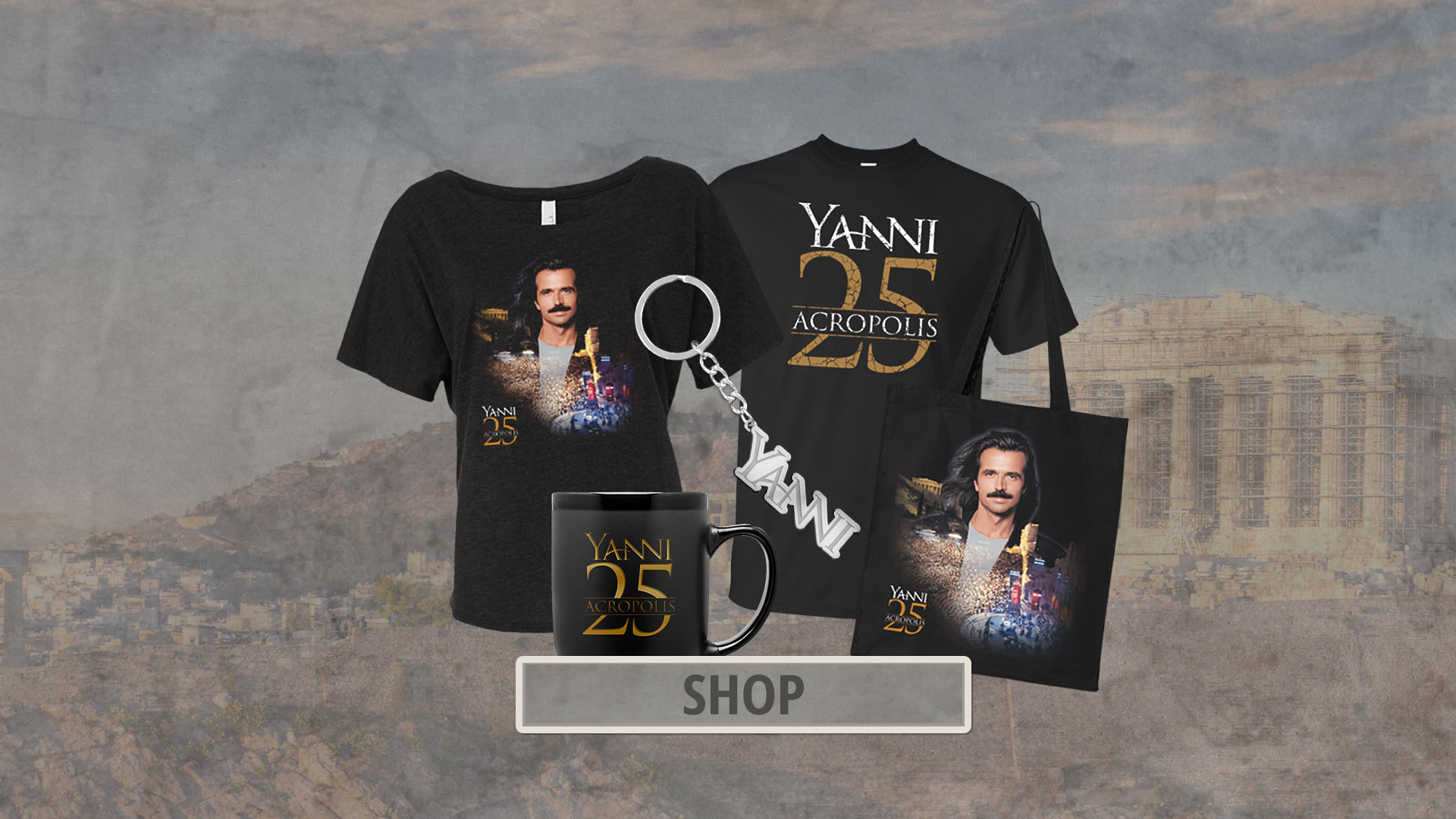 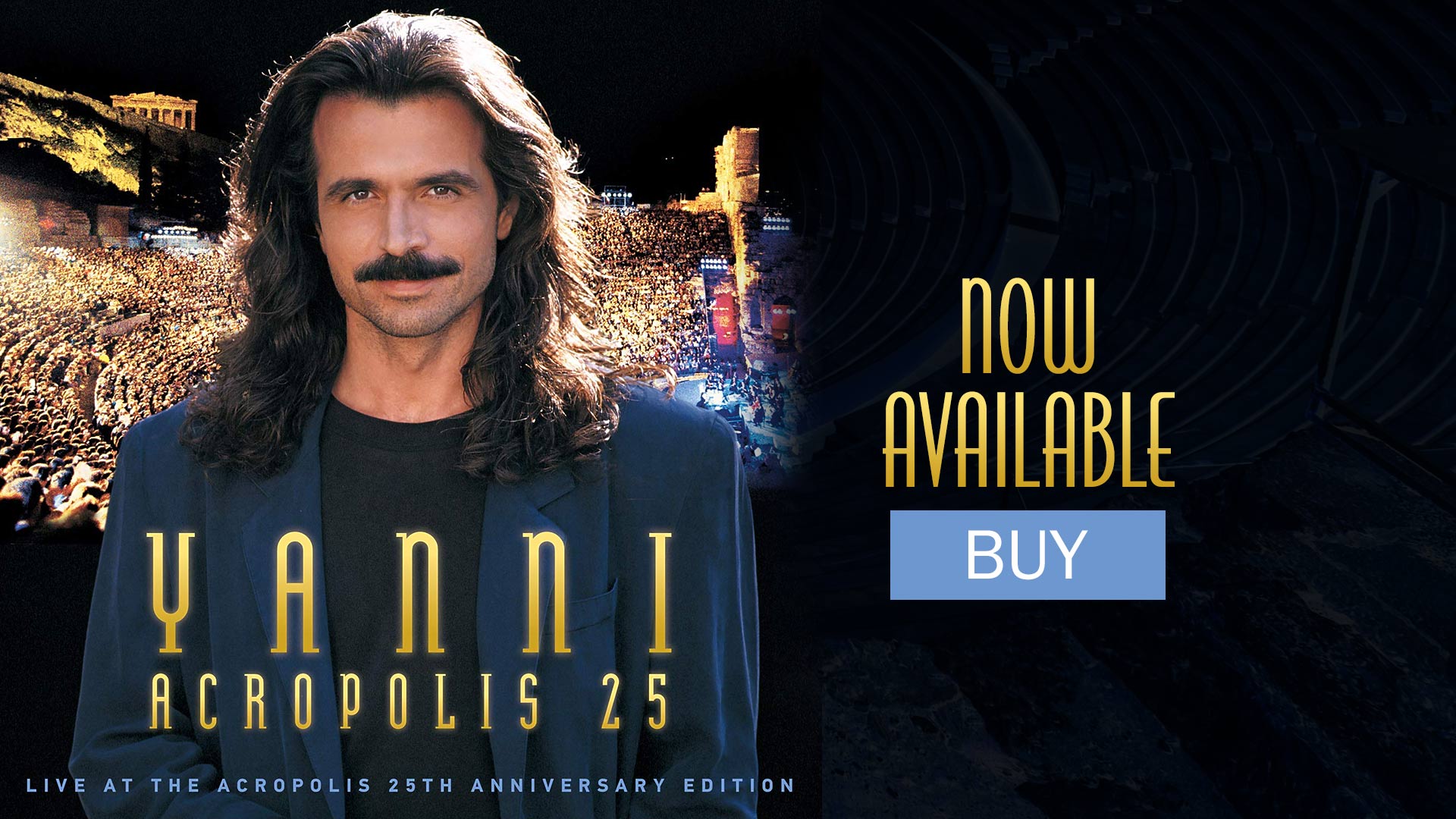 YANNI - LIVE AT THE ACROPOLIS

YANNI - LIVE AT THE ACROPOLIS

CD and DVD reissued together in one deluxe package at a great new price point. Includes new photos and liner notes, backstage interviews and behind-the-scenes footage of the making of the video.
More Info

Tote bag with vibrant image of Yanni and tour logo on one side. 100% Cotton Canvas.
More Info

Yanni – In His Purest Form Episode 1…"If I could Tell You" Yanni’s iconic composition plus musical themes never before heard! This is a one-time-only performance, as it is created Live! For the complete performance go to Yanni’s YouTube channel https://www.youtube.com/user/yannivideos

Tune in every Thursday at 12pm EST starting on May 28th to experience “Yanni In His Purest Form”! Yanni will be releasing a series only on his YouTube channel featuring his most iconic compositions plus musical themes never before heard. Experience him intimately in his home studio as he performs on his one-of-a kind 9 foot Yamaha grand piano - the same one he famously performed on at the Taj Mahal, The Forbidden City and countless other magnificent sites around the world! Each piece of music is revealed as a one-time-only performance... Which cannot be repeated, as it is created Live... and is not edited, packaged or condensed for an album. Experience them in 4k UHD and see each episode in it's entirety ONLY on Yanni’s YT Channel! https://www.youtube.com/user/yannivideos

Yanni Live at the Acropolis “Aria” Ode to Humanity… I will never lose my faith in you!…Do not succumb to fear!…No matter where it comes from!... Your Yanni❤️ For the Highest Quality Yanni Videos!...Go To Yanni’s YouTube Channel: https://bit.ly/3buW8kv

Take a walk down memory lane! Remember who you are! You are “The Keeper“…Yanni❤️ Vocals: Leslie Mills Dedicated to the memory of Kemdi For the Highest Quality Yanni Videos!...Go To Yanni’s YouTube Channel: https://bit.ly/3buW8kv

Yanni - “NICAN” The Never Ending Beautiful Colors of Our World… We Are All in This Together! Yanni ❤️ For the Highest Quality Yanni Videos!...Go To Yanni’s YouTube Channel: https://bit.ly/3buW8kv

Yanni – “If I Could Tell You“ Still remains one of my favorites!… I wish I could tell you :)… Yanni❤️🦅 For the Highest Quality Yanni Videos!...Go To Yanni’s YouTube Channel: https://bit.ly/3buW8kv

Living room time is back! “I am looking forward to playing for all of you once again!… LIVE Streaming at 12:00pm EDT on Mon., 04/27/2020... I hope to inspire you into treating each other and our baby planet, better than ever before… Let’s all learn together! It’s time!"…Yanni❤️

Living room time is back! “I am looking forward to playing for all of you once again!… LIVE Streaming at 12:00pm EDT on Mon., 04/27/2020... I hope to inspire you into treating each other and our baby planet, better than ever before… Let’s all learn together! It’s time!"…Yanni❤️

27 Years Ago! The Concert that Started it All! “Yanni Live at the Acropolis” “Standing in Motion“ Our Road to Recovery has already Begun!… Keep your spirits up!…Yanni❤️ To see the entire performance go to Yanni‘s YouTube channel https://bit.ly/3buW8kv

I am now in your living room, bringing “Live” music to all of you! I wanted to help brighten up your day, bring you warmth and renew your faith, hope and strength!…Like you have been doing for me! With all my love … Your Yanni❤️

Yanni-Live “From the Vault“ “Never Too Late” A Call for Unity, Cooperation and Truth! “We all need each other now more than ever!”… Yanni❤️🦅 https://bit.ly/3buW8kv

We are all in this together! We create our future!… Create well!🦅 Hoping to soothe your hearts with the birth of a new song! “Breathe” … Yanni ❤️🦅

My Reason for Rainbows! Nothing can make a father more proud than watching his daughter flourish!… Dad 😘❤️🦅 I hope this brightens your day! Humanity always prevails! Photography by: Krystalán Cinematography by: Mike Vasili Chryssomallis Music by: Yanni “Reason for Rainbows“ https://bit.ly/3buW8kv

Mexico sends a message of hope, strength and unity to the whole  world, during our sold out Mexico City concert! Tonight, Humanity  came together  in Confronting and Prevailing over our Common Challenges  !… Yanni ❤️💙🦅 https://bit.ly/3buW8kv

The fans serenading Yanni and Krystalán “Mexican Style”,  before the concert in Mexico City!… Everybody loves to sing here! … Yanni ❤️ 🌈🌈

Monterrey, Mexico, fearlessly shows me their love… I am home again!… Hope is alive!… I am touched beyond words!… Yanni❤️❤️🦅 https://bit.ly/3buW8kv

The intensity of life portrayed beautifully, in all its diversity,   just before our sold out concert in  Monterrey Mexico … Yanni❤️       Photography by Krystalán